It was 1933, amidst the prohibition, when a man by the name of Elmer Kramer decided to open a gas station on Irving Ave. It wasn’t until the prohibition lifted that Elmer was able to add carry out beer. Shortly after, he decided to turn the gas station into a local bar. Kramers was known as a sports bar because many people would choose Kramers as there place to “tailgate” before UD basketball and football games.
When it was time, Elmer Kramer passed the bar onto his sons Bob and Red. Red, then passed it to his son, Fred. For 55 years, Kramers was solely owned and run by the Kramer family. It wasn’t until 1988, that an entrepreneur by the name of Tom Zimmerman joined Fred in order to turn Kramers into the bar it is today. Tom added the pizza oven, simple bar food, and liquor.
To this day, Kramers is still family owned and operated through the legacy of Tom Zimmerman. The bar has kept it’s original cement structure (used to keep the beer cold back in the 3o’s) and turn table/carousel style beer cooler. Kramers is one of the few bars in the nation to carry 40 ounce beers which might be why they are referred to as the “Home of the 40’s”.
So, whether it’s the pizza, the 40’s, the tailgating or the family owned atmosphere, Kramers is your place to go. 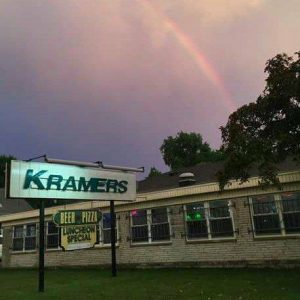